Today has finally come. Over the past 2 months I have prepared myself, training and riding hours upon hours each day. Working with horses that need to be saddlebroke or horses that need lots of hours and miles put on them. Those horses all had one thing in common, domestication. This horse that I’m picking up today is something entirely different. A wild mustang from somewhere out West that will have to be caught and gentled. I can’t wait!!

The trip to Tennessee from my farm in Kentucky wasn’t too long but just long enough that I could ponder over a plan. I knew that a plan for these mustangs usually never worked because they are unpredictable but I still wanted to come up with something to push myself to stick to along the way. I would only have 117 days with this horse before the competition and a lot could happen in that amount of time if I was persistent! Driving in the pouring rain through the hills of southern Kentucky reminded me of how difficult this horse just might be for me to train. Once I was out of the rain and the sky cleared a bit, I started to wonder what color he would be.

The Extreme Mustang Makeover was a competition that I had followed since it began in 2007. I remember reading the article in Western Horseman and thinking how crazy it would be to try to train a wild horse in 100 days or so and then go and compete against other trainers and their wild horses. The event was designed to help find good homes for mustangs that had been caught and needed a place where people could have them and give them jobs these horses had the heart to apply themselves to. The public wouldn’t be so interested in a horse that wasn’t trained so the Mustang Heritage Foundation used the competition to give incentives to the trainers to compete and then after the event the horse would be available to the public to adopt. The mustangs are hardy horses and versatile as well, from ranch work to showing and eventing the trainers over the years had proved these horses can do anything. Now it was my turn to try my hand at working a mustang in a relatively short period of time and hoping I could get the job done. Over the years some of my inspirations have come from horsemen that competed in the Makeover. Guy Woods won the first Makeover in 2007 on his mustang Max. Bobby Kerr won the Makeover in 2012 on his mustang Maypop https://youtu.be/91aXN-dvnIQ . Dan James rode ‘Smart Little Mustang’ backwards in 2013 https://youtu.be/eFLrRDbbgJk , he worked the mustang without a halter or bridle and rode it bareback as well. Tom Hagwood was in the Makeover in Texas last year on his mustang ‘Duckwater’ https://youtu.be/yX4bEuVtMgA . Hopefully this year I will be able to do half of what they did with their mustangs. 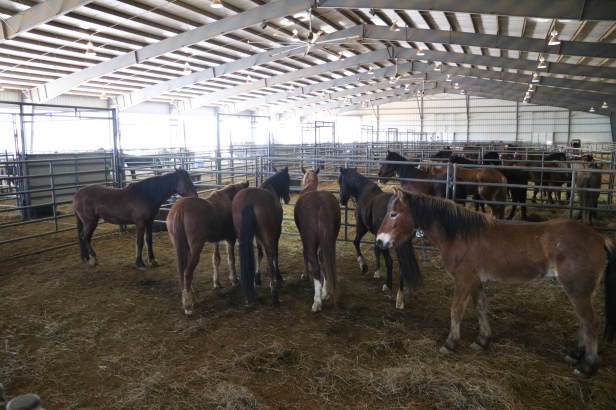 Now my mind needed to come where I was going, I would be picking up the Mustang in Tennessee and bringing it back to my place to start my work. We pulled into the fairgrounds in Lebanon alittle after 11 am and I hurried into the big building where you could hear pen wranglers yelling as they separated mustangs into the chutes for loading. As I waited in line for my paperwork I watched them load a palomino and sorrel. The sorrel was crazy, busting through gates trying to get back with the others in the pen he came from, I hoped my draw wouldn’t be that crazy. The horses in the pen closest to the front seemed quiet as they had been listening to the racket since 8 o’clock that morning. When I found out which horse I drew he came from that same first pen.

He was the biggest out of his pen, a 4 yr old bay gelding from the Silver King Herd in Nevada. His tag read #3567. He seemed the most mature in size and demeanor. I watched him closely with the others. When a squabble would arise he would pin his ears and walk off to find some hay. He like to eat and he wasn’t too curious of me watching him. Every once in awhile he would glance towards me and I would try to get a good photograph. Finally it came my turn to load him up and we headed back to the farm. He was quiet and hardly moved in the trailer. I watched him anxiously through the rear view mirror as I wonder what he would train like. Once we got back to the farm we unloaded him and he settled easily. No panic he just wanted to eat and be left alone. Tomorrow the first day would begin..