I woke in the darkness fumbling to turn off my alarm and find my jeans. I felt like I hadn’t slept much as I walked to the barn. I remembered the night before and wondered if the mustang had tried to escape his stall. As I rounded the corner he was staring at me from the back of the stall in the shadows. His hay and water were almost gone and he had rolled in the shavings. I reached my hand out and was very surprised when he walked straight up and touched his muzzle to my hand. Doubt filled my mind that he was wild and I stood there just watching him. Then I entered the stall to feed and water him and seemed like he completely changed. He tried to turn and run into the corner then he faced me with his front legs trembling slightly. I reached my hand out again but he didn’t move, while he snorted and pawed waiting for me to leave the stall. This was a Mustang! Born out in the desert and touched by the cold mountain wind. He was a rugged specimen of survival and self confidence. 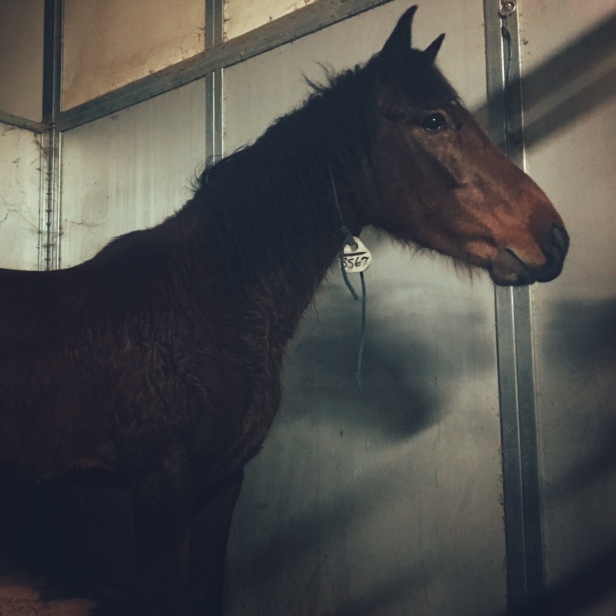 I left him be for a couple hours as I did the rest of my chores. Feeding and watering the other horses I couldn’t help but notice the huge difference between them and him. From the other side of the stall door he was fine with people but that where it stopped. Once he saw the gap in the door he would eye it closely debating whether he should run through it assume. I set up the round pen inside the indoor arena with the help of my brother-in-laws. We had so much mud from the rain that it would be impossible to work him in the pen outside. We loaded him in the roundpen and he paced nervously as I prepared all my tack that I would need.

When I entered the pen with him he ignored me and walked away so I set to work. He was easy enough to move as he was scared by noise and moving the lasso. Soon enough he would turn and face me and I walked away for a second. Back and forth each direction we worked and he avoided me well. Once he settled and stopped moving as much I found a loop in my rope and swung and missed. I missed several times as he dodged back and forth. Finally I landed my shot and he ran around the pen again to avoid me. Managing my space and the coils of the rope was all I was focused on at this point. I didn’t want to be taken off guard by a stray kick in my direction. He didn’t like the pull of the rope and he reared and struck out again and again. After a while he turned and faced me. And I let the slack down in the rope. He paused curious for a moment and stepped my way. I backed off and then he turned and ran. This happened for a solid 45 minutes before I was able to get him used to following me in either direction comfortably. I would start getting closer and then he would turn and run. I kept my patience and gave him some space while I waited. He didn’t know what to think of me yet. He was trusting and confident but then in a flash he was elusive and would avoid me at all cost. 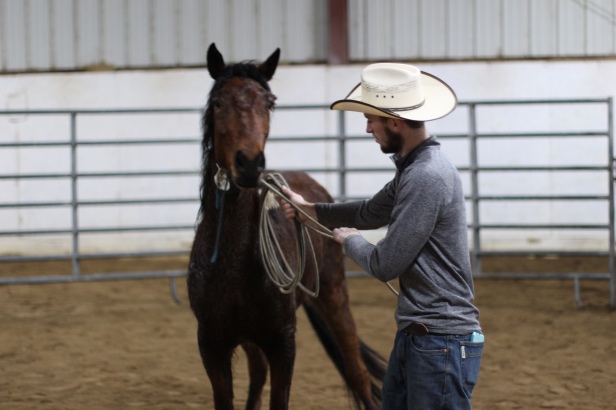 The turning point finally came when I touched him with the coiled end of the lasso. He leaned into it with his head and neck. At first I was surprised that he was fine with the rope then I reached out with my hand and he would lift his head up and shake it back and forth until he leaned down into it. He didn’t like being touched softly, he only liked a steady consistent push into him and then he would push back. I found the key and I used it to gain ground quickly. Within 15 minutes he was fine with me touching him all the way to the base of his neck and then I slipped a halter on him. He struck out at me when he realized the change from the lasso to the halter and lead rope. Then he followed me willing around the pen. 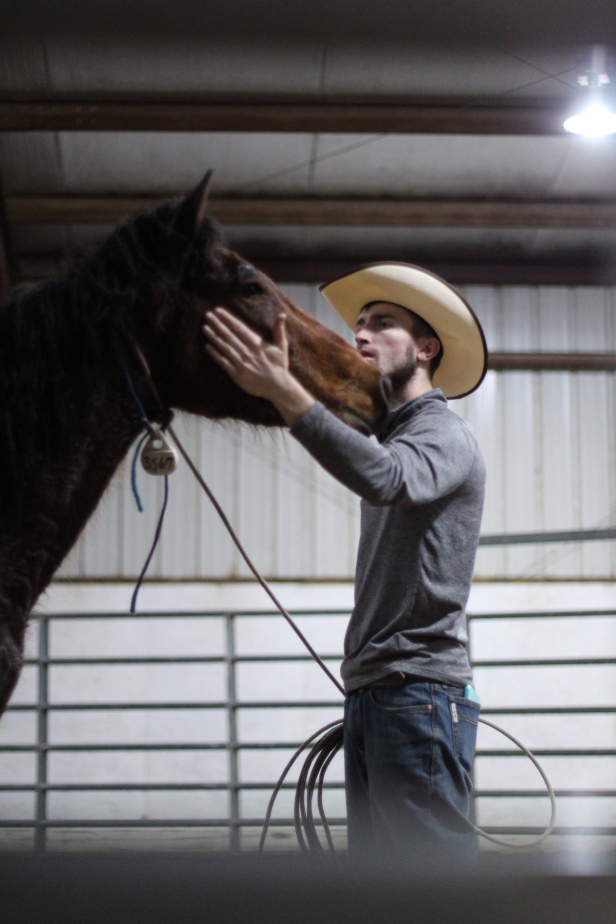 Desensitizing him all over I worked my way to his back and stomach. Finally I started leaning over him and then I jumped slightly and put my weight on his back for the first time. He wasn’t tense or stiff but he didn’t move either. He was calm and walked to steady himself once while I was on his back and I let him take a small circle. With a sigh of relief I slipped off him and gave him a rest. When I got up on him again I was finally able to sit for a brief moment and he just stood still, waiting.. this was the end of my first session. 116 days to go..

My brother Ambrose photographed the session and also took the video available at this link: